Let’s start with a public service announcement; getting any visible tattoos on your hands, fingers, neck or face can seriously affect how people will see you and your future job prospects. Now, you can’t say you weren’t warned…
Visible tattoos are now more prevalent than ever before and there has been recent rise, perhaps inevitably, of a movement asking for “tattoo acceptance in the workplace”. People feel that they should be judged purely on their ability to do a job, and discriminating against their tattoos is no different to any other form of discrimination.

Discrimination, as we are discussing it here, is “making or showing an unfair or prejudicial distinction between different categories of people or things, especially on the grounds of race, age, or sex” (thanks Oxford English Dictionary). Really, one can extend that definition further and include any physical difference, but does it include things you have chosen to do yourself, like tattoos. What if you chose not to wash? Or refused to wear clothes? Would it be discrimination to not employ someone who was naked with BO, even if they were extremely qualified?

Maybe I am being facetious, but the point I am making is there is a sliding scale here, not all discrimination is comparable. I do wonder how much sympathy one would get from someone who has faced a lifetime of discrimination for being a certain race, or having a facial disfigurement for example, because they chose to get a tattoo on their face and now can’t get a job? 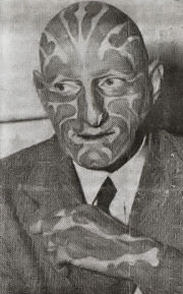 In the past, tattooists were often thought arrogant or elitist for refusing to do visible tattoos on anyone who wasn’t in the industry, or at the very least, already heavily covered. That has changed in recent years and I am not sure every customer quite understood the full consequences. Now I believe that as an adult you can make your own choices regarding your own body, but with that comes the responsibility for the consequence of your actions, you can’t have one without the other. (As an aside, I’m also an adult and have the right to not to say no to any tattoo I am not comfortable doing. We both have rights and sometimes they might not be mutually compatible.)

Now, you may feel you should be able to do any job you would like, even with a tattooed face, neck or hands, that is fair enough, but currently that is not the reality we live in. We all have an idea of how we think the world should be, or how we would like it to be, and then there is the reality of how the world is. You should be able to let your child play in the street without fear of them being knocked over or abducted but we all know that isn’t sensible. Now of course you can try and change that in a variety of ways, but I probably wouldn’t recommend just stubbornly sending your child into the street because you feel you should be able to. You can’t put the cart before the horse.

Now of course, you may disagree with this reality and want to affect the change, but you have to realise that life on the cutting edge, breaking down those barriers is not always going to be easy. If it were, they wouldn’t really be barriers would they?

So how does this translate to the heavily tattooed? Well, being heavily tattooed and starting internet groups, or complaining to anyone who will listen, is just not gonna cut it. You need to make that change. You can start your own business, look how you want and be the change you wanna see. You can employ all the tattooed people you like, be a massive success and show the world that the status quo is outdated and wrong.

Or you can wait until you are in a career where you know visible tattoos aren’t a problem and then be a massive success and break down those social stereotypes.

But please don’t go and get your hands, neck or face tattooed before having a life plan and then complain about how unfair it is when you can’t get a job. Maybe it is unfair, but most people should have really learnt by adulthood that life often is. That is the reality of how the world is, not the way we would like it to be.